Yes, we're in our ninth year now of building lithium systems for RV and for off-grid houses.

We figured it out for ourselves

If you've been researching lithium, you've probably already realised that there are many differing points of view on how best to configure a lithium battery (such as series or parallel connection), safe upper and lower voltage limits, and how best to safeguard against cells in a lithium battery going out of balance.

We had the same problem when we started too, and there was much less information available then, and we rapidly came to the conclusion that the only way to be sure we had it right was to do the testing ourselves. We destroyed quite a few lithium cells in those early days, but we had to know what actually works and what doesn't, and what the true limits are if long life cycle is the goal.

We use Thundersky™ Winston cells

At T1 Lithium we build our batteries using individual ThunderSkyTM Winston LYP (lithium yttrium ferrous phosphate) cells. These are prismatic cells. Each of these cells is 3.2V and we pack them in parallel to build the desired capacity and then in series to build the desired voltage.  This method of configuration gives an even flow of charge into and out of the whole battery.

Electric vehicles use cylindrical cells which are better suited to a high current draw, but they have a poor cycle life when used as a house power battery.

We don't prebuild 12V batteries then connect them together in parallel

We build capacity in parallel

We take the required number of individual cells (see below) and connect them in parallel to get the desired capacity.

We build voltage in series

Then we connect those cells in series to give the desired voltage.

An example of a 200Ah build

This size pack is easy to handle and arrange in the allocated space.

Then we add end plates, aluminium strapping and we compress the whole pack to stop each individual cell from bulging, which is a natural process of charging and discharging any prismatic lithium cell (they will even bulge just sitting on the shelf in hot weather).

The process of bulging means there is more internal space between each plate and separator that has to be filled by the limited available electrolyte in the cell. To fill in this space, the electrolyte level must drop and therefore the whole plate is not covered.

Strapping and compressing of each pack prevents this problem.

We can arrange these packs end-to-end or side-by-side, depending on what fits best in your battery space.

We stock four sizes of cells so that we can offer a variety of power options and sizes of battery to suit an available space.

These are the cell sizes we stock: 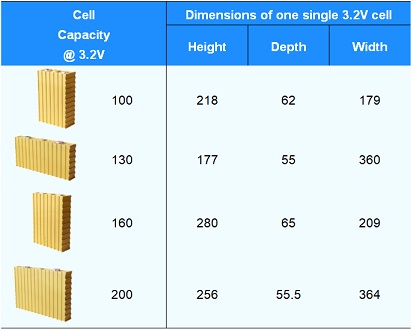 We spread capacity over more cells

When cells are manufactured, there are inherent differences in internal resistance and capacity that is unavoidable in the process of mass production. By using more cells, these differences are evened out over sufficient cells to minimise and cancel out these differences.

We can replace a cell instead of the whole battery

In a T1 Lithium battery, the batteries we build are built with individual 3.2V lithium cells.  We strap the packs together, and therefore they can be unstrapped.  So if a cell should die - and we haven't had one die of natural causes yet - that cell can be replaced.  It's not necessary to replace the entire battery.  Even if a cell is accidentally damaged, it can be replaced.

We can expand your battery capacity

Let's say you decided to install a 200Ah lithium battery from us, but after a sweltering summer you've realised how nice it is to run the air conditioner for hours every day from your battery and you'd now like a 400Ah battery.

In any battery system, it's not good practice to simply tack on one or more new batteries (in a parallel setup) or one or more cells (in a serial setup) to an older set, and it's no different in our system.

So instead, we unstrap the existing pack(s) and we interleave new lithium cells between the older lithium cells.  This ensures that the newer cells and older cells work together.  This keeps the cell groups linked in series better balanced with each other while charging and discharging.

A lithium battery is lighter, faster to charge and discharge, and safer than lead acid. They also have a much longer cycle life and they like to work.