Regardless of whether you're connecting batteries in parallel or cells in series, the cable you use to connect them is vitally important and constantly ignored.

Fighting a fire with a garden hose

Imagine trying to fight a fire with a garden hose. Fire trucks have huge hoses so that fire fighters can get lots of water to move through that hose. Yes, they also have pumps to increase the water pressure, but that wouldn't be much use if they were trying to send it through a garden hose.

The same principle applies to electricity. If you want to move a lot of electricity to power an inverter to run a hair dryer or an air conditioner, it's not going to happen if the cable connecting your batteries or the cable from your battery to your inverter isn't fit to do the job. The smaller the cable and the more amps you try to push through, the more resistance you're fighting against and the hotter the cable will become and the greater the voltage drop.

Voltage is pressure | Amps is volume

Voltage is to electricity as pressure is to water

Amperes is to electricity as volume is to water

Cable size is to electricity as the size of your hose is to water: it creates resistance to flow

Whether you have a 12 volt or 24 volt setup in your RV, you're still working with a very low 'water pressure' compared with the 240 volts you have at home.

You only have 12 volts of 'pressure' to move a quite large amount of amps from the battery. The only way to make it easier for the amps to move from the battery and out to where you want to use that electricity is to increase the size of the cable.

We've put together a list of minimum cable size we recommend for various applications: 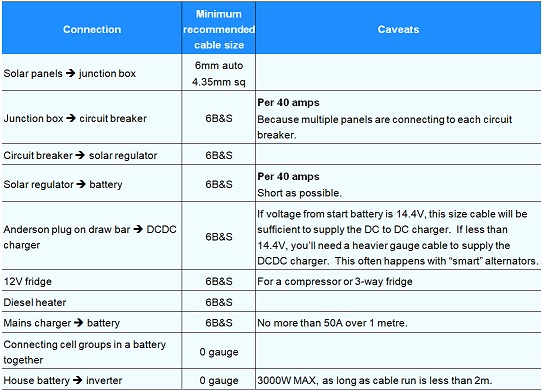 Interestingly, the cable most often undersized and least often seen as an issue is the size of the cable to your fridge. We have helped a lot of people get better performance from their 12V fridge by replacing or recommending replacement of this cable.

Then, just in case this was all becoming understandable, industry gives these cable sizes a rating unit of AWG (American Wire Gauge) or B&S (Brown and Sharpe). The two units are interchangeable. The higher the number, the thinner the diameter of the conductor.

We've put together a list of the common cable sizes we use. It's not exhaustive, but we're not trying to exhaust you: 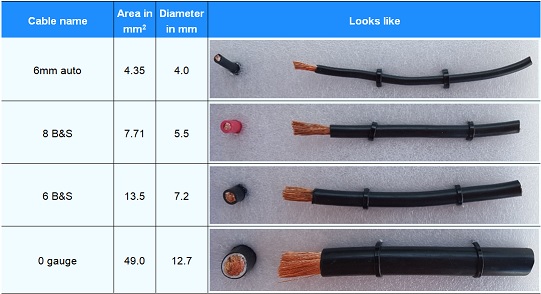 What you see is not always what you get

Just want to show this example as an illustration of the size of the copper conductor versus the size of the insulation. This is a classic example of not getting what you see.

Below is an example of a so-called battery jump start cable, purchased by one of our customers from a nation-wide grocery store:

This is cable that can supposedly handle 200amps to start your car!

At first glance it looks like reasonably sized cable (still not thick enough to start a car), but when you pare back the insulation and see how much copper is actually in there, it's clear that this cable would simply melt if you tried to jump-start a car. In fact, we wouldn't even use this size conductor to join solar panels together!

This is zero gauge cable and it will actually start most small cars, though it's still not thick enough to start larger cars. For connecting batteries and inverters, zero gauge is thick enough in most cases.

The size of the cabling required to connect multiple solar panels and a close look at the MC4 connectors that come supplied with a solar panel.

Connecting cables with crimps and lugs

The good, the bad and the ugly of various types of connectors used in a typical RV.